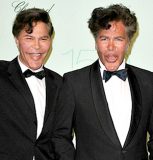 Phd of the University of Bourgogne, France, Professors at the Megatrend University

The Bogdanov brothers were born in the Commune of Saint-Lary, in the Gascony region of southwest France. The brothers came from aristocratic Russian and Austrian families, and their maternal grandfather was noted African-American lyric tenor Roland Hayes.

They each studied mathematics and theoretical physics in Paris, but then began careers in television, hosting several popular programs on science and science fiction.The first of these, Temps X (Time X), ran from 1979 to 1989. In 1991 the Bogdanovs published a book, Dieu et la Science (God and Science), drawn from interviews with the philosopher Jean Guitton. It became a French bestseller.  In 1991, the brothers began work on doctorates, first working under the mathematical physicist Moshé Flato of the University of Burgundy. Flato died in 1998, and his colleague Daniel Sternheimer (of CNRS) took over the job of supervising the Bogdanovs. Grichka Bogdanov was given a PhD by the University of Burgundy (Dijon) in 1999. In 2002, Igor
was given a PhD in theoretical physics from the University of Burgundy.

The pioneering subject of the two thesis is about the state of the « pre-Universe » before the big bang. In 2001 and 2002 the brothers published five papers in peer-reviewed physics journals, including Annals of Physics and Classical and Quantum Gravity. Since 2005, Igor Bogdanov and Grichka Bogdanov have been professors at the Megatrend University where they also hold the Chair of Cosmology and they direct the Megatrend Laboratory of Cosmology where they continue their research.