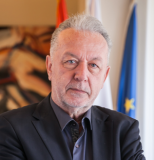 He finished high school in Leskovac and the Faculty of Philology (group of Serbian language and literature) in Belgrade. Completed MA and PhD in the science of literature.
He was engaged in journalism, publishing and public affairs in culture and information. A professional journalist since 1969. From 1987 to 1991 he was the administrator of Cultural and Educational Community of Serbia. From 1991 to 1994, twice elected as the minister of information. From the end of 1994 to February 2001, he was a director of Radio Belgrade. From 1998, he taught at the Academy of Arts. From 2002, a professor at Megatrend University. From the establishment 2005 until September 2014 Dean of the Faculty of Culture and Media. Since September 2014, Vice-Rector for Public Relations of Megatrend University. Member of the Association of Writers of Serbia and the Association of Journalists of Serbia. Author of 15 books and three fictional textbooks. Winner of two annual awards of the Association of Journalists of Serbia (1980 and 2003), the recognition of the publishing project of the ‘Book of hymns’ at the International Book Fair in Belgrade (1986), ‘The Golden Chain of Belgrade’ (1989 ), Vuk’s award (1999) and St. Sava Charter (2000). In December 2011winner of special award ‘PRO.PR’ Association of PR managers of the region Alpe-Adria for ‘contribution to promoting the culture of communication’. In November 2012, at the 6th professional event ‘Marketing event of the year,’ he received the ‘Award for the development of business publicity and public relations’. The Winner of Academy Award ‘Ivo Andric’ for the book ‘The Mirror of Dobrica Cosic’ (2015) . From 1st April 2016 Dean of the Faculty of Culture and Media.