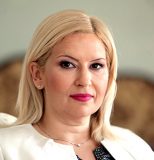 After completing post-graduate studies, Ms Mihajlovic has pursued scientific research, while at the same time applying her expertise to practice. She began her career as a high school teacher at the Belgrade First Economics Vocational School, where she stayed until 1996.The next ten years she spent with the Electric Power Industry of Serbia (EPS), in electricity transmission company Elektroistok, as deputy head of Accounting Department, head of Planning and Analysis Department and Finance Department advisor.

From 2004 -2006 she held the position of an Energy and Environmental Protection advisor to Serbian Deputy Prime Minister, and then she took up the position of Energy Efficiency advisor to the general manager of the Belgrade Nikola Tesla airport where she stayed until 2007.

Until 2010, she worked as the energy consultant to the Prime Minister of the Republic of Srpska – Milorad Dodik.

Ms Mihajlovic sat on the Board of Directors of public company EPS 2004-07 and was editor in chief of the monthly magazine “EU Market” 2007-08. Since 2008, she has been employed at Megatrend University, at the faculty of Biofarming, teaching subjects Renewable Energy, Sustainable Energy Security, Economy of natural resources, the fundamentals of the economy as well as Economics of Natural Resources at the Faculty of International Economics. In October 2011, she was appointed Deputy Dean of Science of that University. Since May 2011, Ms Mihajlovic was an MP in the Serbian Parliament.

Ms Mihajlovic is the founder of NGO “Women’s Government,” member of the NGO European Movement in Serbia, member of the organization East West Bridge and a member of the editorial staff of magazine Eko Srbija.

She received the certificate at the specialist seminar Methodology of Contemporary Corruption (Canadian Development Agency and Management Centre). Fluent in English and passive in French.

Furthermore, she has written and published more than two hundred scientific and research papers devoted to problems and potentials of the Serbian energy sector, in comparison to the region and EU countries, and with the purpose of achieving the sustainable development.

Since 2001, Ms Mihajlovic has given more than three hundred statements to domestic and foreign print and electronic media. Statements of Ms Mihajlovic are usually on the subject of energy security, environmental protection, corruption in the energy sector and correlation between energy and politics.

Mother of a son.

– 2002-2005   The scientific project „Planning and management of sustainable development and standards of the EU“ number of project
1383, funded bythe Ministry of Scienceand Environmental Protection of Republic of Serbia