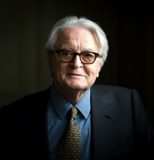 Roland Dumas is a figure that significantly marked political scene and recent history of both France and Europe. He is a part of French political and cultural elite for more than 5 decades, where he built equally brilliant career as one of the top lawyers, great politician and successful diplomat.

He was born in 1922 in Limoges. Mr Dumas comes from a very patriotic family, his father George Dumas was killed by the Gestapo, while helping the Resistance and Mr Dumas shared his passion, not only fighting with the Resistance, but also, to this day, for the idea of humanity, peace and social justice.

He completed his studies in law and political science at renowned universities Ecole Libre des Sciences Politiques and the London School of Economics.

Mr Dumas has been successful lawyer for many years and even nowadays, he is not neglecting his primary profession. During his long lived career, he represented many public figures, among which were, the famous artist Pablo Picasso and sculptor Alberto Giacometti.

He held many high positions in the political life of France. He was one of the closest associates and friends of former French President François Mitterrand. On several occasions, he was elected asVice president of the French National Assembly. He was the spokesman of the French government in 1984 as well as the Minister for European relations.

Mr Dumas left a deep mark in diplomacy as the French Foreign Minister, on which position he remained for two terms from 1984 to 1986, during the presidency of Francois Mitterrand. His time as the Minister of Foreign Affairs was the time full of challenges – the disintegration of the Soviet bloc, the island’s war, as well as negotiations for the Maastricht treaty. In the year of 1995 he was appointed as the President of the Constitutional Council, which was one of the last decisions of President Mitterrand. Even though Mitterrand nominated him as a lifelong president, Mr Dumas remained on this position until 1999.

His opinion is always in the focus of the public, especially when it comes to world conflicts, understanding their causes and possible solutions. These would include wars in Iraq, Libya and Syria (LPC). He is also the founder of the Committee for emergencies in Iraq. As the former head of French diplomacy, Mr Dumas currently has the role of respected commentator on the developments in the international political scene.

He published several books, including the memoirs “50 years of sharing secrets with Mitterrand”, as well as numerous professional publications in the field of Law and Diplomacy. With a versatile personality, Roland Dumas is known to be the great admirer of the arts, especially opera, which is his dream-to-be profession. Since his dream career as the opera singer did not come true, he remained passionate opera admirer who knows by heart the most famous opera librettos. During his visit to Belgrade on the occasion of the award of an honorary doctorate of Megatrend University, he attended a performance of the opera “Il Trovatore” at the Serbian National Theatre in Belgrade. Having a life which represents one rich mosaic, this extraordinary gentleman, monsieur Dumas is great connoisseur of fine arts, a passionate collector and aesthete.